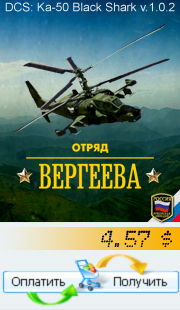 Roman_Leroni information about the seller and his items
offlineAsk a question

Campaign Russian helicopter pilot Ka-50 "Black Shark" for the simulator DCS; Ka-50 Black Shark, ver.1.0.2. The young pilot after graduating from the military flying school voluntarily agrees to the "100" days. This 100-day trip to the war zone in the Caucasus. All events and names in the campaign fictitious. Real conditions and challenges to be faced in the campaign pilot military aviation in Russia. Bring the service with honor. The Russian version of the campaign. Currently this 1/10 part of the campaign (20 missions) from the planned 10 (200 missions). (C) The campaign "Vergeev" R.Leveshko 2010.